Gb Ricambi wins its be

Gb Ricambi wins its be

Gb Ricambi wins its bet: it reorganizes the debt and increases the number of employees

The company of Modena has returned to the banks 90 of the 125 millions of debt it has incurred without dismissals and keeping in the same time its high profitability. The CEO Saporita <<New customers thanks to our e-commerce>>.

It’s the taste of the victory for Gb Ricambi and the bet at stake is definitely high: more than 200 employees and the name of a company that made the story of Modena manufacturing.

After almost 7 years, the storm has passed and in Gb Ricambi the daily words “reorganization”, “debt” and “crisis” have been replaced by “relaunch”, “investments” and “future”.

<<The truth is that nobody believed that our ideas and projects to restore the company’s future were valid and possible: today our ambition is to become the “Amazon” of the spare parts and proceed with the relaunch phase day after day.

Mr. Fabrizio Saporita is the Chief Executive Officer of the company Gb Ricambi, founded in 1962, manufacturer of spare parts for agricultural and earth-moving machines (bulldozers, excavators, scrapers, wheel-loaders, etc) with its two plants in Nonantola and Ravenna and a company in the United States.

In 2010, when the owner of the company Mr. Filippo Borghi died and when the harshest economic crisis arrived, Mr. Saporita was the administrative director of a group which had a total turnover of 170 millions of euro and seven companies supervised in Italy and abroad but with an indebtedness of 125 millions of euro. Mr. Saporita has been the choice of the two shareholders of the company (the wife and the brother of Mr. Filippo Borghi) in order to lead an operation of reorganization that allowed the company – with the collaboration of the accountant’s office Domenico Trombone – to return 90 millions of euro to the credit institutions without dismissing any employees and without asking the support of social safety nets.

Today the debts is around 30 millions and will be closed in few years. The relaunch phase has required new professional figures (60 new employees) in order to realize the company’s reorganization and start a new strategy towards the market: <<The first step has been selling controlling shares to foreign subsidiaries that enabled us to cash 43 millions of euro – Mr. Saporita explains – As far as the company’s activity, we have developed a real marketing office, updated the technical office and introduced new figures in the commercial office, but first of all we have focused on our e-commerce and thanks to our horizontal and vertical warehouses and thanks to our strong network built day after day we are able to deliver the goods within 24 hours in Italy, 48 hours for the islands>>.

Actually thanks to this choice Gb Ricambi managed to reach easily also small customers all over the world and optimizing in this way the profit. The result? Five millions customers have increased to eight millions customers, in Italy 70% of the sales is on-line through its e-commerce while in Europe the percentage arrives to 40%.

<<Five years ago we dealt mainly Fiat® in the agricultural market and Caterpillar® in the industrial market, while today we are able to satisfy the requests for Ford®, Hurlimann®, Landini®, Komatsu®, Lamborghini®, Cummins® and other main brands becoming a real multi-brand group – Mr. Saporita underlines – The objective is to go on following the business model of Amazon and becoming a big “Amazon of the spare parts” able to give a complete repairing service of the machines>>.

Italy, United States and Saudi Arabia are the main markets and today the financial situation is stable even if the turnover, around to 70 millions of euro, has reduced compared to the past keeping however high levels of profitability. The company looks to the future : <<We are ready at this point to leave again stronger than ever and we aim to reach new slices in European markets where the quality and the service mean a lot>>. 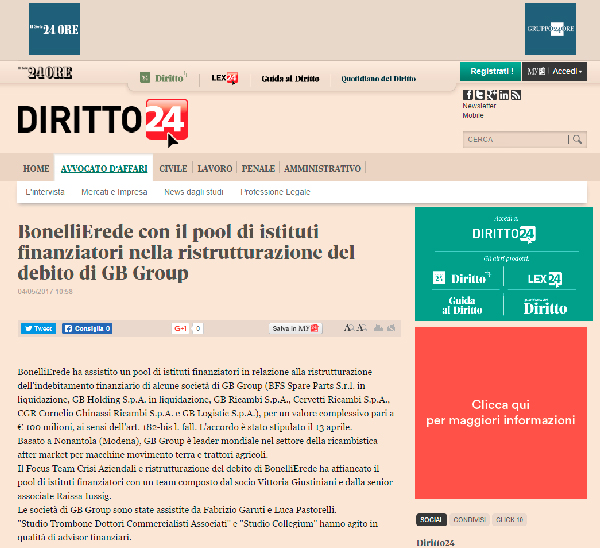